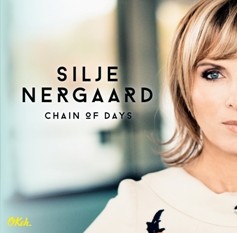 Chain Of Days is a “chain” of 11 songs with no genre-boundaries, carefully put together with a focus on melody. There is a touch of folk, pop, jazz, Norwegian folk-music, country and blues, but all of the songs have Silje Nergaard’s recognizable and distinct signature.

Surprisingly enough, this is the first time as a vocalist that Silje Nergaard has experienced a feeling of total release and complete freedom while recording in the studio, on this, now her 15th album! This time Silje invited the band to record together with her live, all standing in the same room:

“They are extremely talented musicians, all with a strong and unique sound. It felt very different when I could feel them and see them when we played together, just the way we do on stage. It felt natural and authentic. It was a fantastic week.”

- For the second song “The Dancefloor” Silje invited the American vocalist Kurt Elling, one of the world’s premier male jazz vocalists to sing a duet with her. Elling has been Grammy nominated 10 times and won a Grammy in 2009 for the album “Dedicated To You”. He immediately accepted her invitation and agreed to sing with Silje on the track. It now stands as a unique and beautiful fusion of two personal and expressive voices.

- “Morgenstemning” is the only song sung in Norwegian on the album. Accompanying Silje on this track are ten singers from male choir ‘Gli Scapoli’.

- “Hunting High And Low” is a large and lovely ballad written by A-ha. Silje lived in England in the same period as A-ha when had their big breakthrough. Morten Harket sang a duet on Silje’s second release. She, as well as many other artists, has been inspired by A-ha and Silje wanted to pay a personal tribute to them.

The recording of ‘Chain Of Days’ has been a new experience for Silje Nergaard, and it’s become an album that she is very proud of: “I hope that I make music that can be a soundcape to people’s lives … That my songs can hold listeners by the hand through both the good and the sad times of their ‘Chain of Days’.”

Order the CD here or download it on iTunes.