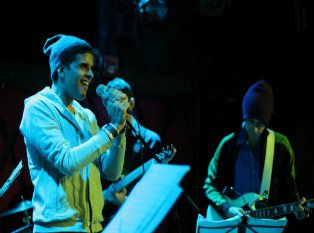 On January 10th singer Sachal showcased for the first time his new songs in New York. The repertoire, taken from the forthcoming album Slow Motion Miracles, was extremely well received by a full house.


Sachal, who wrote most of the songs performed, had help from an all-star band, which supported him perfectly:

Outstanding songs in an overall great show were the title track of the album as well as the first single “No More Tears”, which got an enthusiastic reception from the audience. A great evening for all!

For more and bigger pictures, please visit our Facebook-Page. You will also find more pictures on Sachals Facebook Page.

Sachal also shared two tracks of his upcoming album “Slow Motion Miracles” on Revive Music. Click here to listen and if you like it, please pre-order SLOW MOTION MIRACLES here.