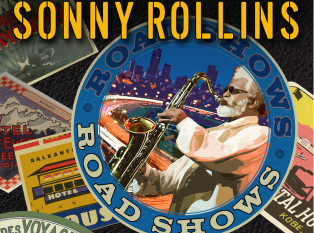 Sonny Rollins’s preferred element is on stage, in front of an adoring crowd, free to follow his every impulse and dazzle with his inventions—he is fully at home there. And that’s not just because in those situations this iconic tenor saxophonist is unencumbered by time restraints and issues in the control booth. The best thing about performing for him, by far, is seeing how happy his playing makes all the excited people who turn out to see him.

Some of those performances—ones “that present parts of me I want to have presented”—will be available on record to his fans on the upcoming album Road Shows, Vol. 3 which will be released internationally on May 5th. With the expert help of longtime associate Richard Corsello, his engineer at Fantasy during the 1980s, Sonny Rollins selected 6 tracks recorded between 2001 and 2012 in Saitama, Japan; Toulouse, Marseille, and Marciac, France; and St. Louis, Missouri. Meaningful bridges between past and present, they capture his essential Sonnyness while illuminating the new directions in which he is perpetually pointed.

In celebration of the release of Road Shows, Vol. 3 Sonny Rollins will participate in a video conference broadcast live on YouTube and Google+: “Sonny Rollins Meets His Fans.” To be a part of the hangout and ask Sonny Rollins your question, enter the Facebook contest.

Have a first listen below and pre-order the album here or on iTunes.