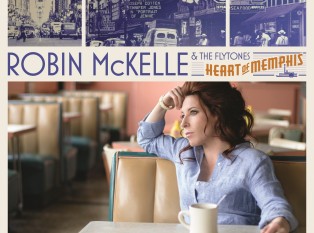 For her new album Heart of Memphis Robin McKelle immersed herself in the spirit of Memphis. The City is like a place of pilgrimage for any soul, blues, or rhythm and blues fan. Despite the time that has gone by and the museums being built in place of the legendary recording studios, the spirit of the city that, in its heyday, represented one of the best eras of American popular music has not disappeared. “I wanted to capture the Memphis sound in the recording process and the goal was to write the music and arrangements with that sound in mind.” says Robin McKelle.

Except of “Please Don’t Let Me Be Misunderstood” and “Forgetting you”, Robin McKelle wrote eleven of the thirteen titles of Heart Of Memphis. “I really love writing,” she says. “It’s important to continue to create new sounds and push ourselves into unknown places. That’s what artists are put on this earth for, taking risks and chances. Memphis soul is different from the Motown sound because has more raw emotion and being in the south it’s also influenced by country music. It’s more ‘in your face’ than the Motown. I have a natural gritty sound or rasp in my voice so this sound suits me well.”

Together with her loyal Flytones and helped by her bass player and musical partner Derek Nievergelt, Robin McKelle created amazing and authentic soul music songs.