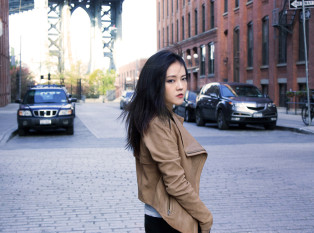 “The title of this album refers to two different types of strangers: the people who once were strangers that have slowly walked into my life, and those people who were close to me in the past that became strangers over time. Aside from these definitions, ‘Stranger’ can also mean other things. As a Taiwanese musician based in New York City, I have been a minority in the USA for years. During this time I have often felt like a stranger everywhere I go.” (Jo-Yu Chen)

A native of Taiwan, New York-based pianist and composer Jo-Yu Chen began her formal musical training on piano at the age of five. Later, at the age of nine she also began studying the oboe. After moving to New York City to study oboe and piano at the prestigious Juilliard School, Chen discovered a diverse musical scene thriving in the heart of the city. In May 2005, after Chen received her doctorate in music education from Columbia University, she decided to make the leap from classical music to jazz.

Where most musicians today release a record as a statement that they have arrived, Jo-Yu Chen’s recordings characterize the ongoing journey of musical exploration which the pianist began with Obsession (Sony, 2010) and followed up with Incomplete Soul (Sony, 2011). The journey continues with Stranger, her new album for Sony and her first on OKeh:

“These compositions were inspired by specific transitions and events in my life. Each track on this album has its own character and sound. I feel eternally grateful for the opportunity to continue recording and working with musicians whom I admire. The creation of this album has been an amazing experience for me, and it has certainly contributed to my personal growth. “(Jo-Yu Chen)

Get a first impression of the album below and pre-order the CD here!