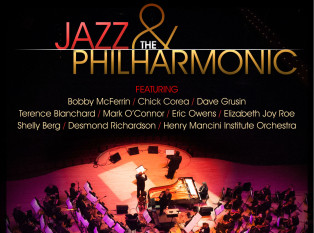 The historic event is a collaboration of the National YoungArts Foundation, the Frost School of Music, the Adrienne Arsht Center for the Performing Arts, and JAZZ ROOTS: A Larry Rosen Jazz Series.

The all-star concert event was presented and filmed at the 2,000-seat John S. and James L. Knight Concert Hall at the Adrienne Arsht Center on January 11, 2013.

Two years in the making from concept to broadcast, the project harkens back to seventy years ago when producer and impresario Norman Granz expanded the scope of the jazz audience from clubs to classical concert halls, staging an all-star jazz concert at the Philharmonic Auditorium in Los Angeles. The July 1944 show marked the first Jazz at the Philharmonic concert that grew into an institution with Granz assembling internationally touring ensembles for the next four decades. In February 2014 this project will expand on the concept by bringing together world-class artists, composers, arrangers, and a full size philharmonic orchestra to audiences around the planet.

John Richard – CEO Adrienne Arsht Center for the Performing Arts – states: “Jazz and the Philharmonic was a truly historic moment in American music history that was only possible with the incredibly enthusiastic cooperation of four musical institutions. The concert represents Miami’s growing status as a music destination and is a testament to the power of music to unite us all.”

Get a first impression of the recording here: