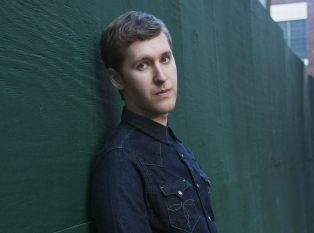 Nir Felder debuts on OKeh with his album Golden Age

The guitarist Nir Felder – a native of Katonah, New York – will release his debut on OKeh records in early 2014.

He started to play the guitar at the age of thirteen, graduated from Berklee Collage of Music in Boston and won the Berklee guitar department’s Jimi Hendrix Award. In New York, he hit the ground running, gigging immediately at the Jazz Club Small’s with saxophonist George Garzone and rapidly amassing credits that include sessions and performances with Greg Osby, Terri Lyne Carrington, Meshell Ndegeocello, José James, Esperanza Spalding, Jack DeJohnette, Eric Harland, and the New York City Opera. It was not long before NPR labeled him “the next big jazz guitarist.”
The song’s the thing for Nir Felder. His debut album Golden Age puts his skills as a composer and songwriter at the forefront of his creative design, supported by virtuosic technique. Together with pianist Aaron Parks, bassist Matt Penman and drummer Nate Smith he brings his unique musical vision to life. “The album is called Golden Age, and it’s more of a question than a statement,” Nir Felder says. “It looks bad for the arts in New York City at the moment, and some people are nostalgic for the 1980s and early ’90s, when times were rough and unsafe but art and culture were flourishing. Was that a ‘golden age’? Is this one? Has there really ever been one? The question is always, according to whom? So, there is a lack of clarity about whether things are going great or they’re really bad, and the music reflects that.”

You can order the CD here or download the album on iTunes.