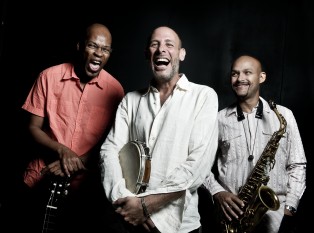 There could hardly be a better start for the new year – the 2014 jazz season will be opened by none other than Jeff Ballard, together with outstanding guitarist Lionel Loueke and the great Miguel Zenon on saxophone. Their first ever album collaboration “Time’s Tales” offers a varied repartoire from Thelonious Monk to Iranian folk melodies, with influences from Bartók, Duke Ellington, George Gershwin, Stevie Wonder and more. At the same time, it reflects the musicians’ different geographic backgrounds – the USA, Benin and Puerto Rico.
Opening with a funky african groove in 9/4 and moving over to imitated bird melodies, “Time’s Tales” also offers dark and slow textures, including a cover of contemporary rock band Queens of the Stone Age while closing with a completely improvised song which can be considered a glimpse into the future of the band. The album is characterized by complex rythms, exotic harmonies and soulful melodies.

Get a first impression below and pre-order the CD here.