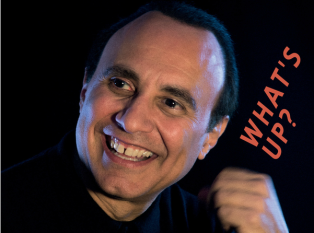 “As usual, Camilo’s pianism is remarkable, not only where technique is concerned, but moreover, for the range and beauty of his sound. The many moods Camilo conveys could not be achieved without his control of the instrument at its most intimate level.” – Billboard

“I am thrilled to be nominated for the Latin Grammy® for Best Latin Jazz Album for What’s Up?,” says Camilo. “It truly feels like a dream come true since it was my wish to perform and record an album full of contrasts of color and rhythm as a contribution to the rich tradition of Solo Piano styles. I had lots of fun making this one. I am grateful to Wulf Müller and Chuck Mitchell at OKeh for supporting me in this very special project.”

Produced by Camilo and recorded by Grammy® Award winning engineer Phil Magnotti, the 11 tracks on What’s Up? provide a stunning demonstration of the pianist’s originality, spotlighting seven original compositions and four uniquely re-arranged jazz and Latin standards. While What’s Up? is Camilo’s first OKeh release, it does signify his return to the Sony Music Entertainment family, having recorded for Portrait, Epic and Columbia at various points throughout his career that has spanned over three decades (including his 1988 self-titled project on Portrait, which peaked at #1 on the Billboard Jazz Chart).

Camilo will also be performing two solo piano engagements at the SFJazz Center in San Francisco on Saturday, October 19, at 7:30PM and Sunday, October 20, at 4:00PM. The Michel Camilo Big Band is set to perform at The Blue Note in New York from Tuesday, November 5 through Sunday, November 10, with sets at 8:00PM and 10:30PM. For further dates, please click here.

Don’t forget to check out the Making of What’s Up in the video section!