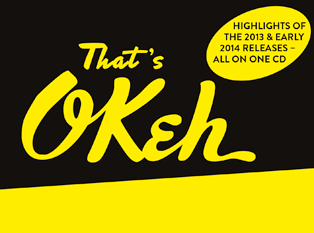 OKeh is back! With more than 10 albums in the first 12 months since starting to issue new jazz recordings! April 2013 saw the release of ‘A different time’ by John Medeski and since then there have been a selection of great jazz instrumental and vocal recordings: Michel Camilo, Bob James & David Sanborn, Bill Frisell and Kat Edmonson to name only a few artists.

“That’s OKeh” compiles the highlights of the first year after the relaunch. It also offers a look forward to brand new and upcoming releases by Nir Felder, Somi, Jo-Yu Chen, James Brandon Lewis and Theo Croker. The sampler represents what OKeh is all about: GLOBAL EXPRESSIONS IN JAZZ.

Order the CD now, download the album on iTunes or listen to That’s OKeh on Spotify.