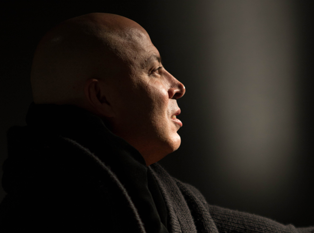 In December 2012, Dhafer Youssef, one of the most highly respected and influential virtuosi of the oud, started to work on his new album Birds Requiem. After recording primarily in Gothenburg, Sweden, with additional recording in Istanbul he finished the album in 2013, but it is still not an easy task for the Tunisian musician to describe Birds Requiem.

“I could talk about what occurred in my private life, about the shock and the tidal wave of emotions. Maybe I could talk about my perception of music, about this desire to reach the limits of what is possibly feasible… or I could describe all the artistic and human encounters which punctuate the album and also about the fact that through some songs reoccurring like leitmotivs, Birds Requiem reminds me of a movie music.”

Birds Requiem is a suite of 11 interconnected compositions, structured around what he has dubbed the “ Birds Requiem” suite, whose four parts (“Birds Canticum,” “Fuga Hirundinum,” “Archaic Feathers” and “Whirling Birds Ceremony”) form the centerpiece of the recording. For Dhafer Youssef, Birds Requiem marks the continuation of a journey into the possibilities of the oud. He could write for hours trying to describe the album and yet not succeed in revealing its essence which can only be felt while listening. His music is in the first place, a communion with the audience. It solicits the senses and it is a perpetual renewal. Describing an album of music will never reveal its essence.

“Why write about this album? Why present it? I am an autodidact and I believe that music is beyond walls, it possess a singularity that makes us feel ourselves, feel the other and feel the music. And I am waiting impatiently for the live performances so I can share these emotions and see this album, like the ones to come, evolve and take shape with the audience.”

You can order the CD now, download the album on iTunes or listen to Birds Requiem on Spotify or Deezer.